Discover some of my projects

Throughout my time as a student, I had to opportunity to work on several projects and I have since some time felt a need to capture the value created during those projects. Sometimes, it was a university project and other times it was projects I had done by myself ; but all the times that I was tasked to do a big project, I loved doing it. This is my attempt to save some of what I created.

So here is a selection of a few projects I have come to realize. Many of the presentation includes pictures of even videos.

China Hardware Innovation Center, 1 year and a half long project in a team of 5 students from 3 different schools, to design and create a connected object.

China Hardware Innovation Center (CHIC) was a year and a half long project in a team of 5 skilled students (2 engineers, 2 design students and 1 business student), where we had to entirely designed from scracth a connected device, in our case a smart sensor for home plants, that can transform any plant into a highly sensitive touch sensor and generate beautiful visuals.

For the first year of the program, we worked on the creation of a sensor (3D printed box, PCBs) which allowed minimal viable performances (the sensor could detect when a plant was being touched). The second year of the program was focused on a much more technical aspect: the development of a new sensing technology that uses machine learning to not only detect when a plant (or actually, any object) is touched, but to also eventually detect how or where the object is being touched.

The work involved many aspects, a lot of them being technical: programming microcontrollers, designing PCBs and producing them, fast prototyping.

Though we also had to work in a team and this came with its challenges and many opportunites to work my soft skills. This project was definitely one of the highlight of my student career at EPFL.

Robottle is an autonomous robot able to collect plastic bottles in a random environment. It was entirely done in a team of 3 students. This project was showcased by NVIDEA as proof of concept for what a Jetson Nano Board can do !

Robottle was made for an academic event hosted at EPFL, where autonomous robots have to collect plastic bottles in a random environement and bring them back to a recycling area.

Our robot featured states of the art technologies, including a Lidar to run SLAM algorithm, a camera with Deep Neural Network for object recognition. You can see more about our robot with this video that we made to illustrate our project.

After I was contacted by NVIDEA developer teams, Robottle became a showcased project and gained its own little referenced on the NVIDEA official https://developer.nvidia.com/embedded/community/jetson-projects#robottle

Data Science Project, rewarded as in the 'best 10 course projects' (out of 138 projects).

Check out the webpage of this project: click here

During a course of Data Science at EPFL (CS-401), in a team of 3 students we had to first replicate a paper and then to do a creative extension of the results previously illustrated. The bigger part of the project consituted this extension.

Our team was assignated a paper about an online strategy game called Diplomacy, and we conducted an in depth analysis of this game using a huge dataset that we were glad to acquire online. I was in charge of most of the data processing pipeline to extract meaningful features or plots from this dataset that contained 22'000 games (knowing that each game is... months long !)

Check out this video which presents most of the results.

I have written a fully functional Chess Engine, starting from scratch and using nothing else than the standard library in C++ and SFML for graphics. You can easily try it out in your own computer by compiling the project.

It was pretty difficult to finish the project, there was many challenges. Here's a few of the highlights of the project

During a 3 days hackhathon, we developed a mobile app to help local stores gain visibility.

Vici was realized in a lapse time of 3 days, by the end of the weekend there was a fully functionable iOS app, a website done classicaly (HTML + JS + CSS) and a Python server coded in Django running on a rapsberry pi. Unfortunately, this project wasn't kept alive much longer after the hackathon though you can still access its project page at this link.

I was in charge of many parts of this project, from ideation to almots all of the iOS programming. The only thing that i didn't take part of was the website development.

Also, feel free to check this video presenting the project !

I love animals but it's difficult to take good pictures of them. So with my friend, we worked one weekend to design an animal trap

During the lockdown, I was observing at birds at my window and wondering that I'd like to see them from closer. I also happened to be in possetion of a Raspberry Pi with a super cool Pi camera v2.1 NoIR.

So, with my friend Johan (You can check out his own website, he is a great physicist and my adventure companion, go at this link) we decided to 'build' (that's a big word) a little box, equippe it with: the raspberry pi, some IR lights that we got from some old remotes, the camera and a phone battery. 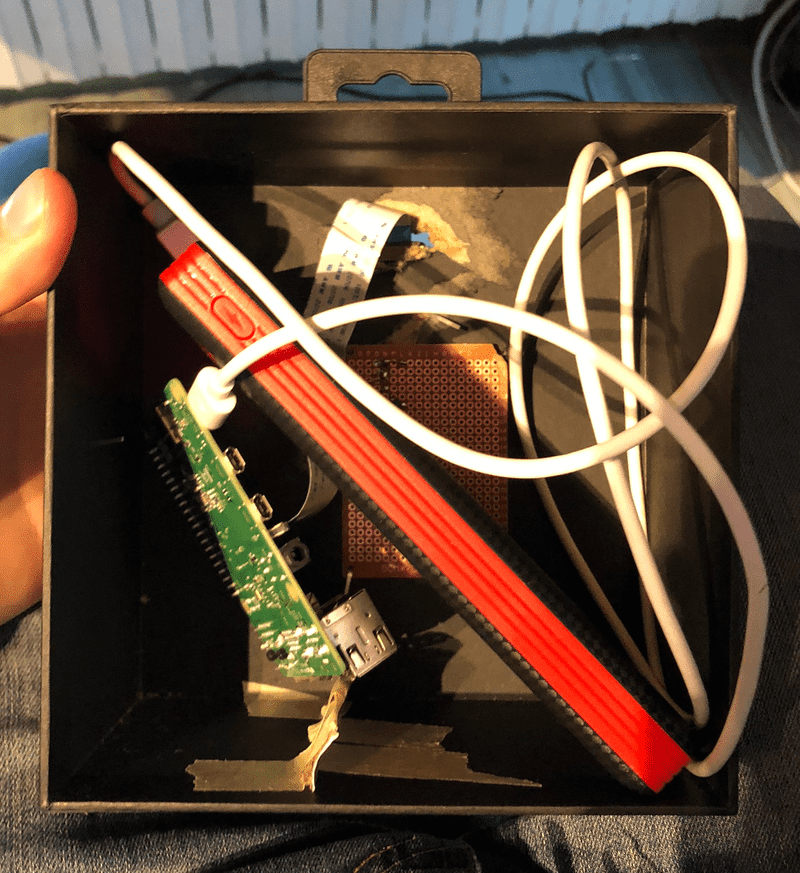 Though it is really not great design (it was mostly for fun), we would take some great pictures of birds and it was a good practise of computer vision. In a few words, the algorithm looked for difference between the current image and the mean image of the stream.

In this project, I had to analyse a video of a robot moving on top of numbers and operators to deduce an equation. I succedeed the project and its additional challenge and scored the best possible grade.

The work involved to work with videos in Python, Object Extraction using state of the art computer vision to detect numbers and operators on the ground and Object Classification using a tuned Neural Network that is color independant and rotation invariant, using several Deep Learning methods.

As you may have understood it, I like hiking. This is an Android App to track your recordings using GPS data and connected devices, then save them using Google's Cloud services.

This project was done for a course at EPFL. In a team of 3 students, we developed an mobile app over Android to be your 'hiking partner'.

The app featured a connection with a smart-watch to record data such as chocs or average acceleration. It also used GPS data to compute speeds or distances. Here are some layouts from the user experience ! 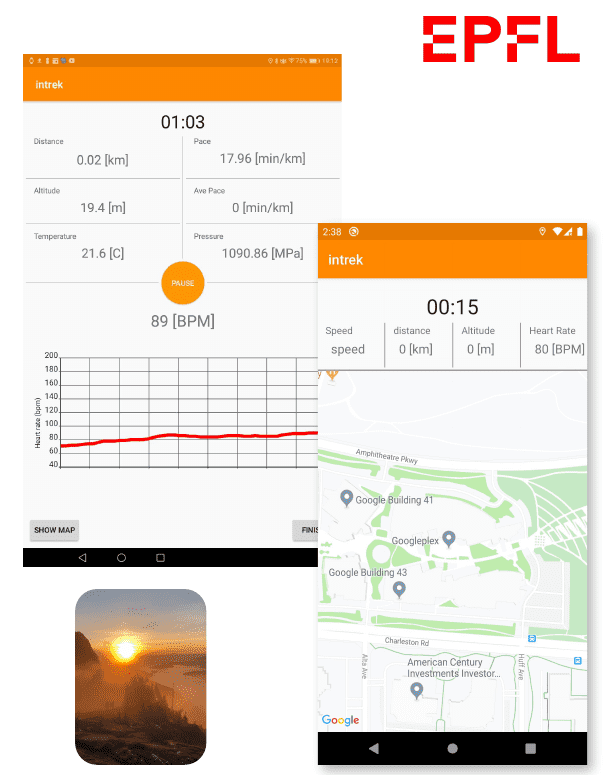 This project is a mobile game that I did with my brother when we were younger. Though it may not be the most professional recommendation, I had learned a lot while working on this enormous remake of the very famous Mine Sweeper.

When I started working on this project, I knew not much about programming, Swift, or software construction. It took my brother and I more than a year of learning to have this game. 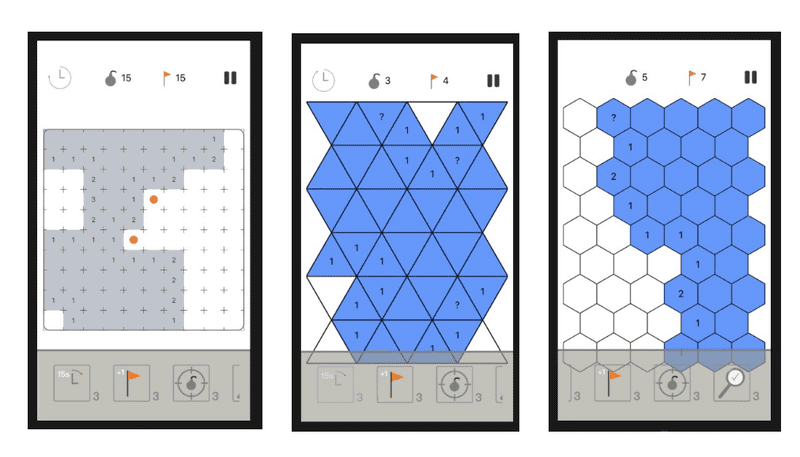 It is a remake version of the famous game 'Mine Sweeper' that included the following features:

Working with the design of this game was very difficult ! The geometry of the game is really not so trivial when it was about hundreds of triangles. Unfortunately, the game is not available in the AppStore because one has to pay each and every year for that. But you have access to all the code, and it really works !

This website was something I had in my mind since a long time. Doing it fully in React was really a great opportunity.